Marsha Hollingsworth grew up in Seattle Washington in the 1950s, where the many opportunities to be in Nature were an ideal place for a young girl pretending to be Sacagawa. Her love of Nature was enhanced through her experiences in Camp Fire Girls. Camping, canoeing, hiking and sailing deepen her appreciation for the natural world.

Seeing her daughter’s artistic tendencies, Marsha’s mother gave her art supplies and signed her up for art classes. She also encouraged her by watching with her a class in Japanese Sumi-e painting on KCTS, the newly formed Seattle Public Broadcasting station, where they learned to paint bamboo and little birds. This was one of the many Asian influences on Marsha’s artwork. After graduating from high school, Marsha attended University of Washington and received a BA in art with an emphasis on drawing and textile design. 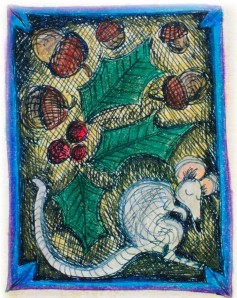 Emerson. Drawn to live closer to Nature, she had that opportunity when she moved to the Olympic Peninsula.

First introduced to bookbinding when a friend asked her if she’d like to do bookbinding work for his business, she went on to learn and develope her skills and knowledge of the bookbinding process. Her business, Hand Bookbinding, gained a reputation for skilled bookbinding and quality restoration work.

In 1985 Marsha moved to Santa Fe, NM where she worked as the wardrobe mistress for the New Mexico Repertory Theatre and ‘stitcher’ for the Santa Fe Opera. The lighting and colors of the southwest and colorful art of the Pueblo cultures of New Mexico were an inspiration for Marsha’s water colors during that time. After a brief time living in Hawaii, where the leaf forms and colors of tropical plants became another influence, Marsha returned to Washington.

Through her life Marsha has kept journals, illustrated pages of observations, favorite poems, quotes, experiences, pictures of places lived and travels taken. These journals have continued to give inspiration to her art.

The threads of Marsha’s life – her passion for Nature, education in design, early exposure to Asian culture, have all been woven together in her collages and watercolors.  Using the beautiful papers from her bookbinding, the watercolor skills developed in New Mexico, and drawing from notes and illustrations from her journals, she continues to explore new methods and styles in her art work.

Recognition of Marsha’s artistic achievements has come through shows where she has sold her collages. Her miniature collages caught the attention of  The Alliance of Religions and Conservation (ARC), a London based organization helping major religions of the world develop environmental programs based on their own teachings, beliefs, and practices.  ARC purchased both original and digital copies of Marsha’s work to use on their web site, in presentations, and publications.